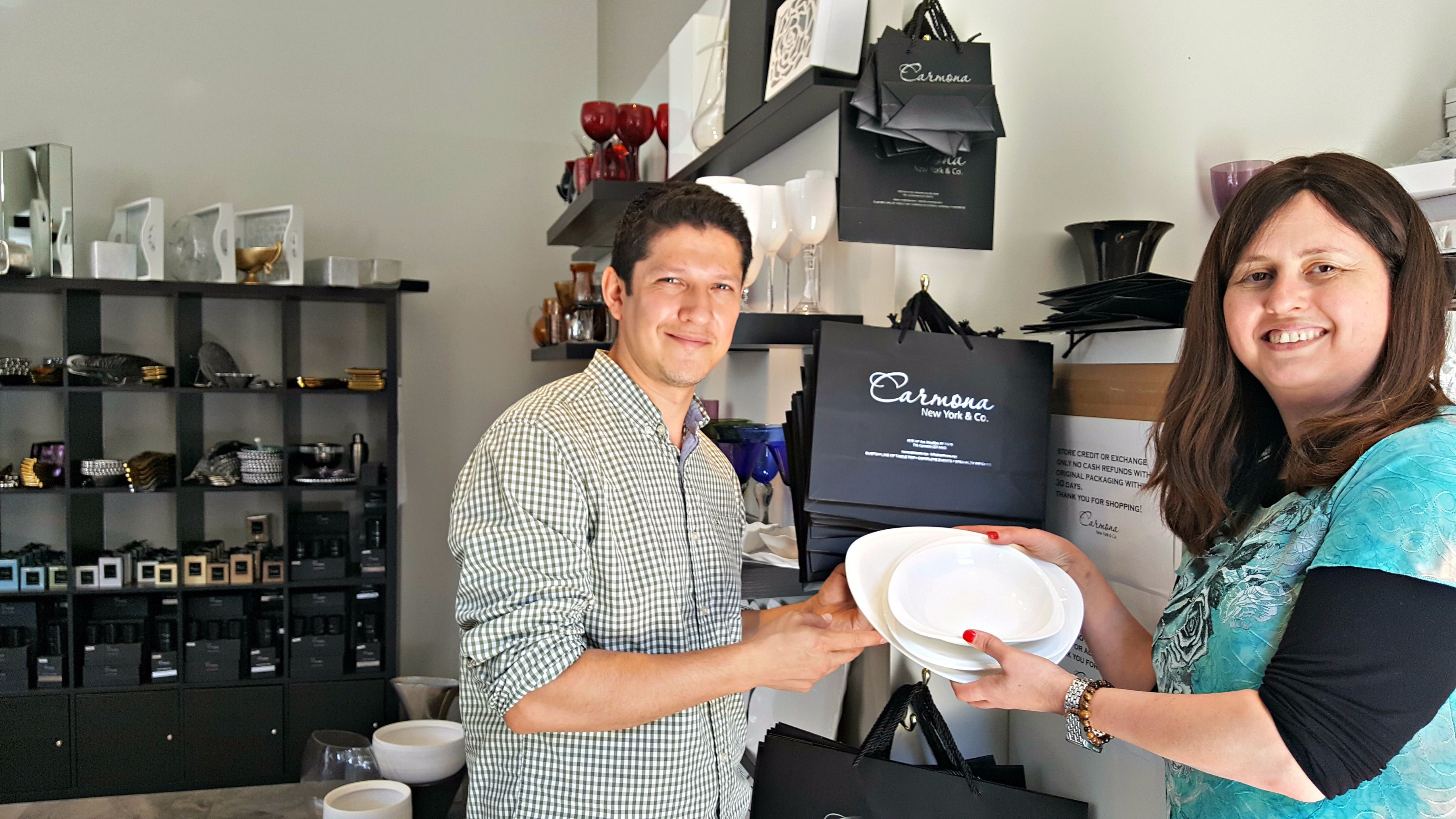 Such dinnerware may seem out of place in an ordinary soup kitchen — but Masbia soup kitchens are far from ordinary. They are designed to preserve the dignity of the diners. “We try to give it a restaurant feel,” Rapaport said, “a feel of people being invited, being comfortable, feeling that they can come into a communal, middle-class place, so to speak, rather than feeling like a place where you’re getting a handout.”

Volunteer waiters serve the food. And in the new location, dishes will replace disposable plates — part of an effort to go green, Rapaport said.

The soup kitchen’s new, upcoming Boro Park location is just a block from Shomrei Shabbos, a 24-hour synagogue whose wee-hour availability for prayer minyans has been reported in The New York Times and other media outlets. Masbia’s other locations are in Rego Park, Queens, and the Flatbush section of Brooklyn.

So what made Carmona reach out and offer her donation?

An Orthodox single mother of five, she was born in Ramat Gan, in Israel, to a mother whom she described as mentally ill.

“I was not exactly homeless, because I did have a house if I wanted to be abused,” she said. “Often I went to sleep hungry.”

Carmona said she wished she’d had a place like Masbia when she was a child.

At 17, she married an American and moved to the United States. Making the donation to Masbia, she explained, gave her a sense of closure.

“To be able to give back to people who don’t have anything, not even food,” she said. “I was once one of those people, and I’m now on the other side. You don’t forget where you came from.”

Masbia’s chef, Ruben Diaz, accompanied Rapaport to Carmona’s showroom to pick up the new dinnerware, and said he found the experience moving.

“It was an emotional connection because she had a very hard time,” Diaz said. “If you have a hard time, you come to Masbia and you see that the food is great, the place is great, you’re going to be a little more happy that day. With her donation of such expensive and elegant plates, the new location at Boro Park is going to be totally beautiful, it’s going to be like a high-class restaurant.” 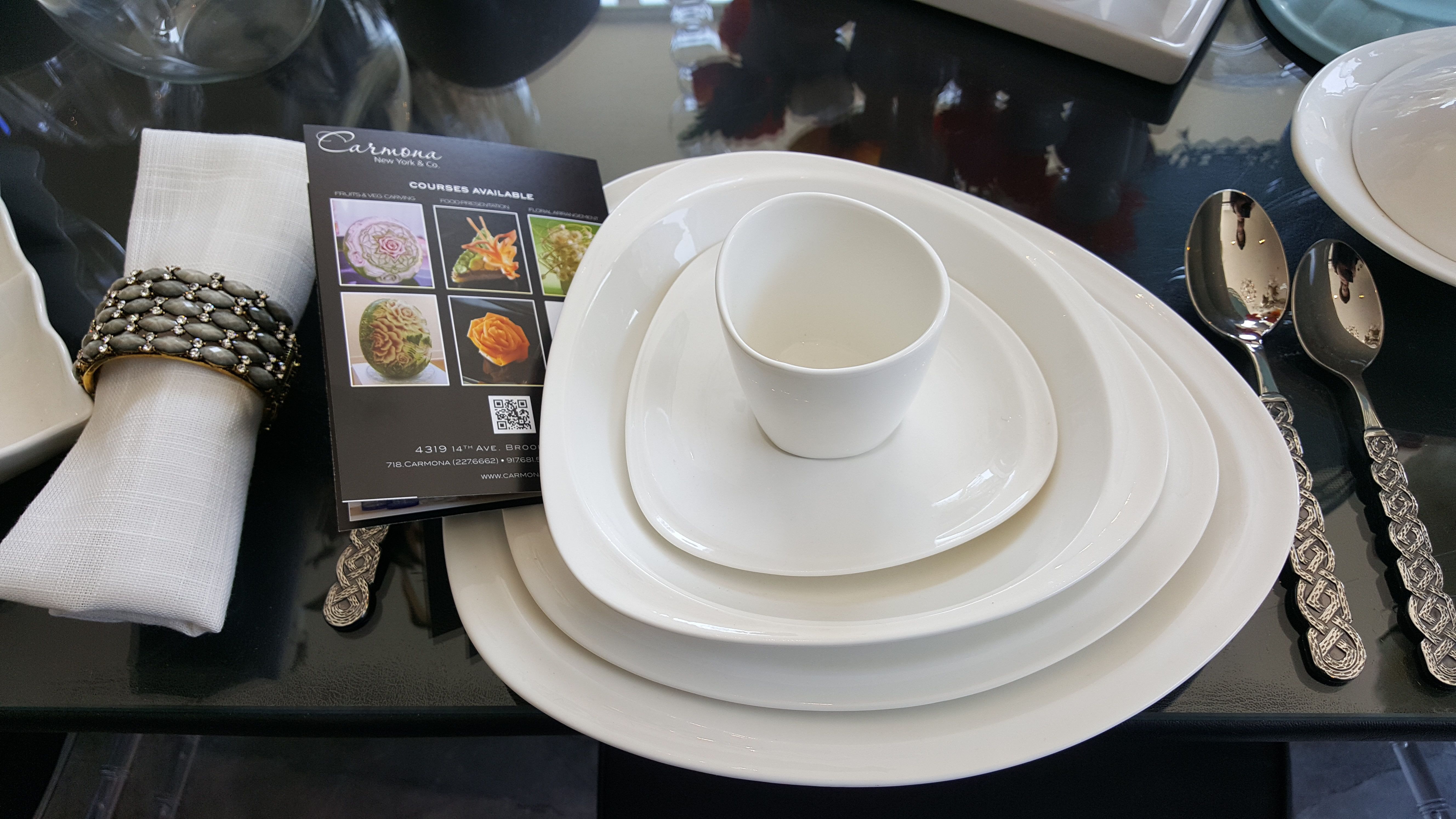 The story of how Carmona came from where she began, to making those elegant plates — and how they ended up in a major motion picture — is one of sheer determination.

“It all started just to prove my worth,” Carmona said. “I was told I was not worth anything. I came from a Hungarian family where everybody baked. I started baking just to prove that I could. And people liked my cakes, so that became a business.” Baking led to party planning — Carmona would buy flowers for an event and rearrange them because she didn’t like the way they were done.

Next came Tulips & Pansies, a Manhattan-based fundraising competition for Village Care of NY, to raise money for people with HIV/AIDS. She competed against a number of top floral designers. “I was the only Jewish girl there, and I took first place three years in a row.”

Next, she became a wedding planner. And in the same way that she wasn’t satisfied with other people’s floral arrangements, she found herself unimpressed with the dinnerware she had to choose from when planning events. “I never found dishes I love, “ she said. “I decided somebody’s got to do it. So I created my own.” She designed Twilight for the movie, and now manufactures it for sale.

“I saw online that they were looking for donations for Masbia, and I said, let me see what I can do. I donated Twilight because it was very popular. For me it’s a closure of a circle. Coming from nothing, going all the way to Hollywood, and doing it all on my own.”

Liza Schoenfein is the food editor of the Forward. Contact her at [email protected] or on Twitter, @LifeDeathDinner