NY Times: A Kosher Soup Kitchen Offers a Dignified Place to Eat, and Steak for One Day

The poor and hungry people at the Masbia soup kitchen in Borough Park hardly fit a bums-and-bag ladies stereotype.

The storefront, on 14th Street in central Brooklyn, in one of New York’s largest Hasidic communities, serves only hot kosher meals. Its operators say it is the only soup kitchen of its kind in the city, and at first glance it seems to have a dress code that is also unique. The men — and it is mostly men — wear dark suits, white button-down shirts and black hats.

“From a distance, they may look no different than a rich man, but if you look closer, you can see the difference,” said Mordechai Mandelbaum, a co-founder of the soup kitchen who was also dressed neatly in the traditional Hasidic garb on Thursday night.

Indeed, closer scrutiny of some of the patrons revealed subtle signs of hardship: a slightly smudged shirt, a somewhat rumpled suit, a bruised felt hat. The few women were generally seated away from the men and dressed in traditional skirts and wigs, some with small children.

Thursday was more crowded than usual because the kitchen was serving steaks — juicy, 16-ounce kosher shell steaks. Seconds were even available.

A soup kitchen that serves steak might sound rather luxurious, but steak night comes only once a year at Masbia, in honor of Grand Rabbi Yeshaya Steiner of Kerestir, Hungary, who died in 1925 and who was known for feeding the hungry and other acts of charity.

His poster-size likeness was taped to the wall behind the steaming pans of steaks and side dishes of carrots, potato kugel and gefilte fish. There were also pickles and sauerkraut, and fruit cups for dessert. Each table had bottles of cold seltzer and a memorial candle, in honor of Rabbi Steiner.

“Word got out that today was a special day,” said Alexander Rapaport, who co-founded Masbia in 2005 and who made sure steak night was listed on a Yiddish news hot line. That might have accounted for the long line when the kitchen opened at 4 p.m.

“At my synagogue, they were saying, ‘A 16-ounce steak? Who’s going to finish it?’ ” said Menashe Silbert, another official of the soup kitchen, which has a dozen tables and was designed to resemble a restaurant. Tall fake plants and screens between tables give diners some privacy.

Masbia, the Hebrew word for “satiate,” serves 160 meals five nights a week. “We wanted to make it look like a restaurant,” Mr. Rapaport said, “because people in our community don’t want to be seen going to a soup kitchen — it’s highly embarrassing.

“But we’ve had people come in and eat and ask where they pay. We have to tell them, ‘No, you don’t pay.’ People here are kosher so they won’t go to any other soup kitchen. It’s come here or starve.” 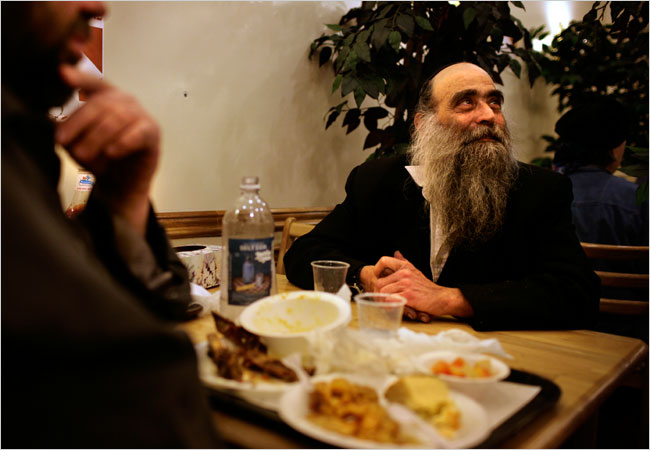 Yankel Greenberg after a meal at the Masbia soup kitchen in Brooklyn, which serves 160 kosher meals five nights a week. CreditOscar Hidalgo for The New York Times

Being down and out in Borough Park may seem to conflict with the area’s image of well-to-do families. But, as elsewhere, jobs have been lost and rents have climbed, and then there are the rising costs of sending children to yeshivas and the extra expense of putting kosher food on the table. Mr. Rapaport said it was not unusual to see parents and older people alike hoarding free snacks at synagogue, and families on food stamps and government assistance.

Two men at Table 6 would give only their first names. “I don’t want people in my synagogue to know I come here,” said one of the men, Meyer, 55, who lives in Flatbush.

Meyer said he had been unemployed for six months and recently went back to work as an optician. He enjoys the camaraderie at the soup kitchen.

“They treat you like a mensch, not a second-class citizen,” he said.

His dining companion, Eli, 57, said that he had recently been divorced and was short of money.

“I’d rather be home with my wife and two kids, but I don’t have them anymore,” he said. “It’s just me and my four walls.” He added that he would have preferred his steak rare, rather than well done, but added, “I guess beggars can’t be choosers.”

Mr. Rapaport said, “We try to treat everyone equal: There’s a saying that even in the synagogue, the fishmonger sits with the stockbroker.”

Borough Park is an insular neighborhood where many of the signs are in Yiddish. There are adults who have grown up here who never learned English. Mr. Rapaport said he finally learned it “from listening to NPR.”

Some of the kitchen’s $500,000 annual budget comes from city and state aid, but most comes from local donations, Mr. Rapaport said. Mostly, money is solicited from couples who are getting married, drawing on an old-world tradition of donating to the needy just before marriage.

“These guys think you have to be Orthodox to come here,” Mr. Mandelbaum said. “We call those things funeral yarmulkes. You can tell they just put them on.”

The two women at Table 3 said that they had fallen on hard times, and that it cost much more money to keep kosher.

“This place is a godsend,” said one, a 50-year-old woman who had lost her job as a legal secretary. “And the steak is very good. My father was a kosher butcher, and meat, I know.”