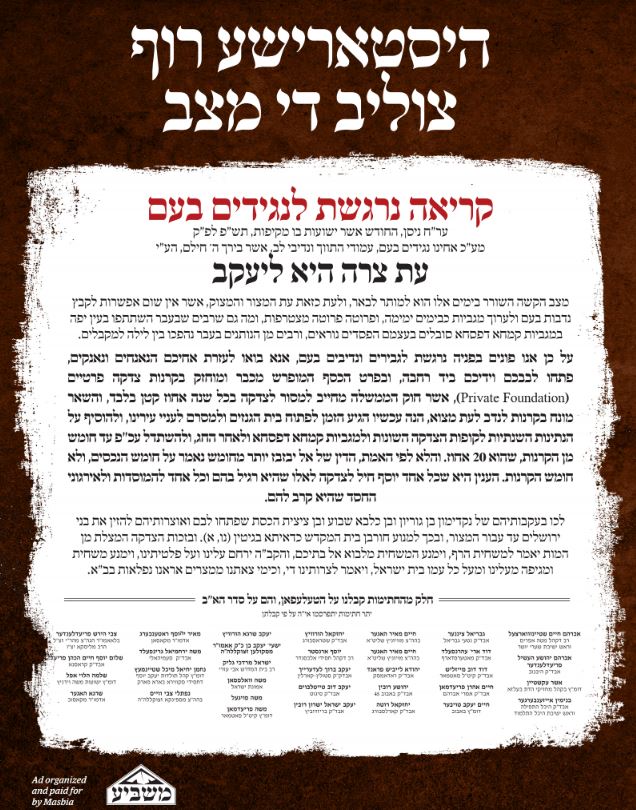 Extraordinary call during extraordinary times:
Orthodox Rabbis Call on Private Foundations to release a Fifth of their holdings

In addressing the wealthy, the rabbis directly implore them to “please come to the aid of your brothers and sisters who cry out from the depths of despair”, by increasing their yearly disbursements to 20% of charity foundation funds. “There is almost nobody in our community who has not been affected by the terrible situation; some are affected financially and others physically. Presently there is no possibility of raising charity funds as in the past years. Many who in the past participated generously are presently suffering terrible losses” The rabbis write.

Alexander Rapaport, of Masbia Soup Kitchen Network, who spearheaded the idea said “There is historical precedent for this campaign, and the rabbis mention it in their letter. In the besieged Jerusalem during the time of the destruction of the temple the cities most prosperous came together and pledged unprecedented resources to support the community. The rabbis hope that some would follow in their footsteps during the current crisis.

I'll give you another one, Rapaport added,”King Solomon refused to use the treasures his father King David left him to build the temple, because he felt that it was tainted since it wasn't liquidated during the time of great famine”.

“The bottom line is”, he added, “regular fundraising is down, the need is up and urgent, and there is a crisis all over, this is a time to throw out the old playbook and try something new. This is a wake-up call to those who have charity dollars on hand to do their best and distribute as much as they can at this historical moment of crisis.”

Passover is traditionally a time when traditional Jewish communities raise substantial amounts in order to make sure that the poor in the community have enough funds to acquire food and clothing for the holiday. The Coronavirus shutdown has greatly curtailed traditional fundraising means, especially face to face fundraising that is now suspended. “Many who in the past participated generously are presently suffering terrible losses, some even have unfortunately turned from givers to takers.” the rabbis write.

Rather than setting up a new fund, the rabbis made a call on the prosperous to give to existing community institutions; “Our aim is that everyone should increase their charitable giving to those benevolent institutions that are close to your heart and regularly gain from your generosity” the rabbis implore.

Over 30 rabbis signed the petition, some literally and some virtually due social distancing. More signatories might be added. Although this call is not limited to Passover charity, it is still important to circulate as soon as possible. Therefore, organizers felt that it is too close to Passover to wait for going public. Organizers encourage other neighborhoods and communities to copy the text and gather the signatures of rabbis in their community to promote this initiative.

Copies of the letter will be mailed to all foundations in the Boro Park neighborhood.

(Masbia will also be circulating a letter from a decade ago, signed by Boro Park’s rabbinical leaders, that was put together as a reminder of the strong prohibition of price gouging.) 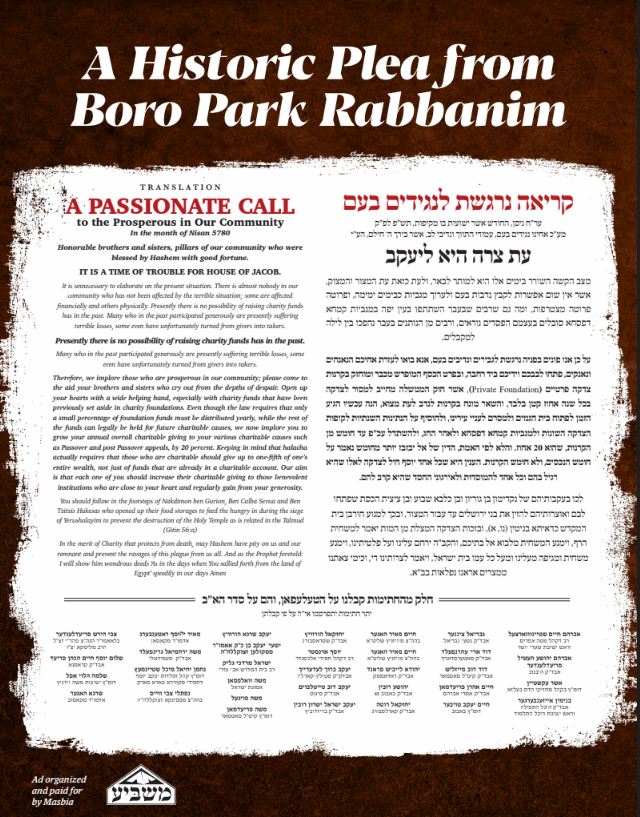 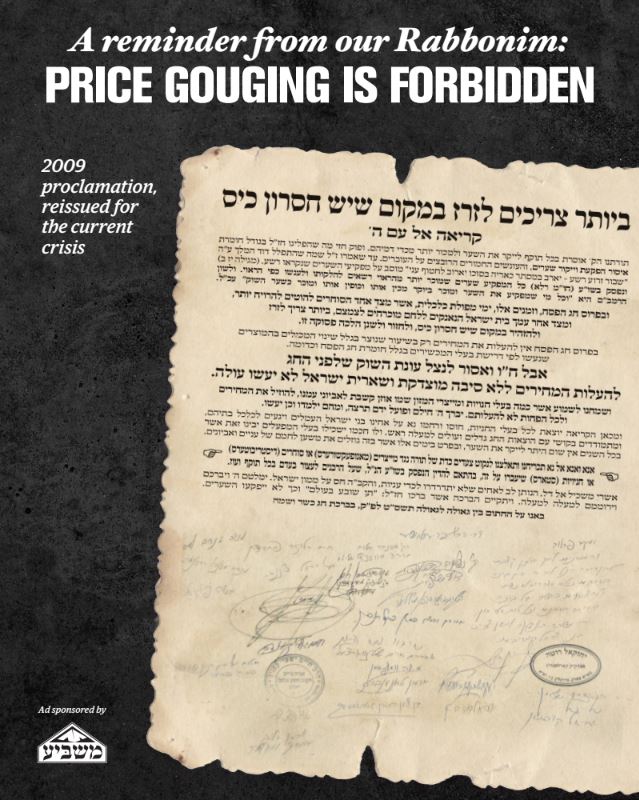 File photos from Rabbis signing in 2009 against price gouging 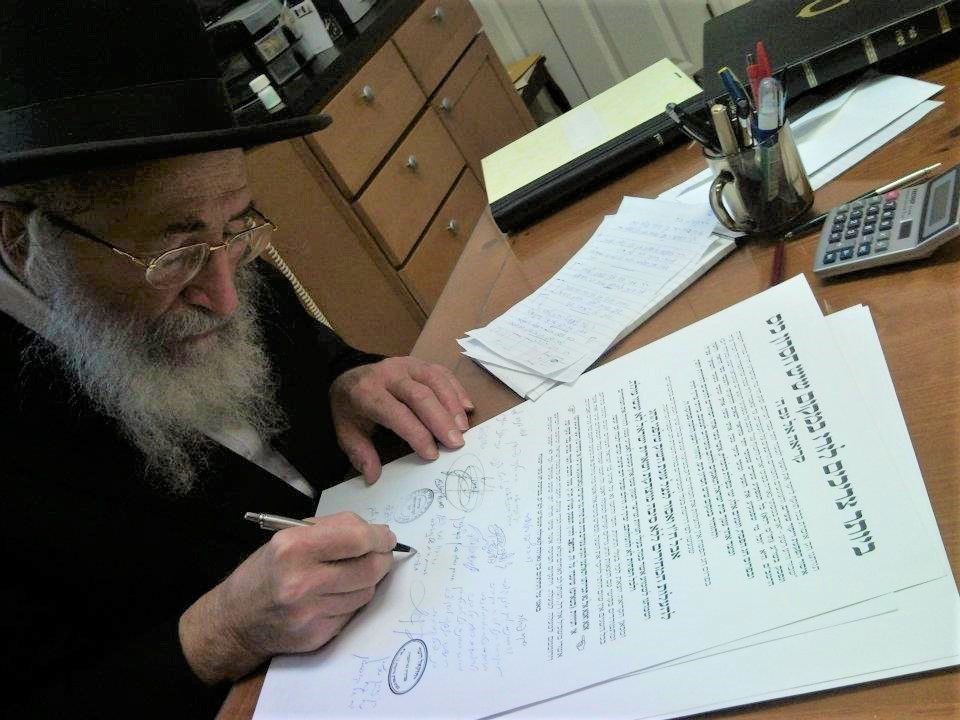 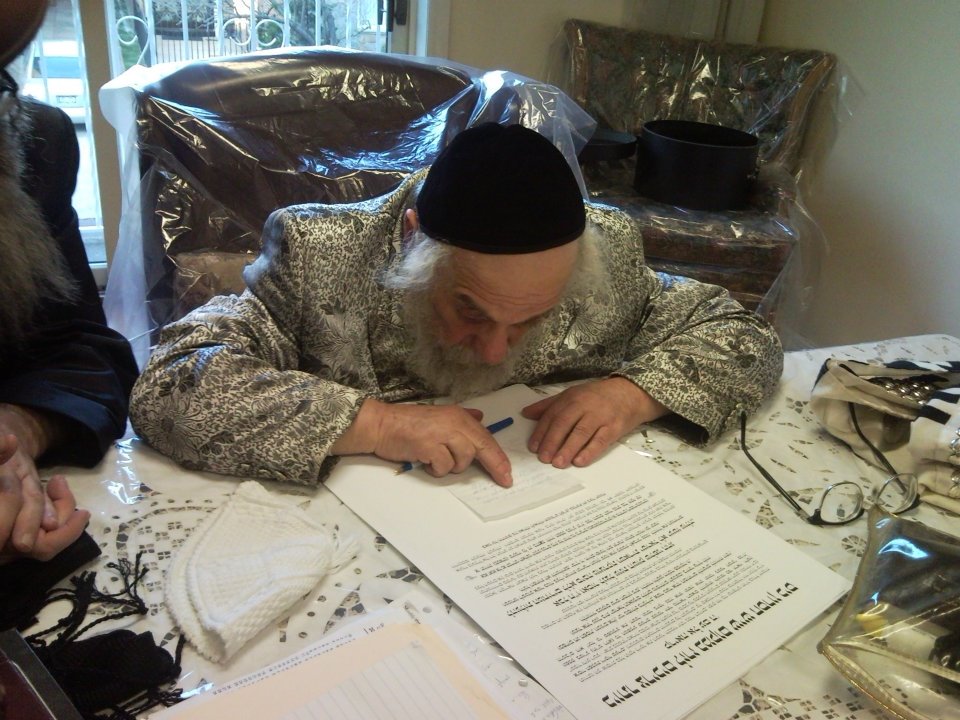 Please check your e-mail for a link to activate your account.
Give Volunteer